THE FIVE PHASES OF MYTHOSIS

Formation of the mitotic chromosome formed by two homonymous chromatids joined by the centromere.

The myotic chromosome: condensation of chromosomes. 30 nm fibers that give rise to supercoiled loops anchored to proteins of the chromosome skeleton. Protein action: topoisomerase 2, condensin, and cohesin: they form the rings that surround the fibers.

Injection of the kinetochore in the centromere. Place where the microtubules are connected. It joins the pericentric heterochromatin with them for separation of the chromatids: cohesin present. Mitotic spindle formation: disassembly of microtubules at the end of the G2 phase (MPAS inactivation) that assemble in prophase. The two pairs of centrioles (Phase S duplication) separate upon entering produce. The centrioles organize the microtubules in the form of "ester" in such a way that when migrating to each pole they contribute to the formation of the bipolar mitotic spindle. Dissociation of the nuclear membrane and disappearance of organelles: 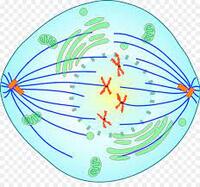 Another important event during prometaphase is the development of a protein formation called a kinetochore around the centromere, the central point joining the sister chromatids. Long protein filaments called kinetochore microtubules extend from poles on either end of the cell and attach to the kinetochores. Prometaphase is followed by the third phase of mitosis, known as metaphase.

Chromosomes are a partner on the back: spheronization. Chromatids move to opposite poles of use: anaphase A to spindle poles even more: directions or states due to polymerization/elongation of microtubules: anaphase B How do you separate the chromatids?

The chromosomes are grouped at the poles. Disperse (decondensation: 30nm dibs) Assembly of the nuclear envelope: dephosphorylation in n lamellae. Dorman the ER and the AG. Daughter cell formation. The decrease in M ​​cyclins would cause the daughter cells to enter the G1 phase of the interface.