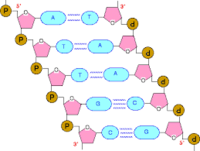 .The DNA chain is a sequence of nucleotides that form a solid skeleton for the information storage where the deoxyribose is joined by the esterified phosphates between positions 5' and 3'.

The links are covalent phosphodiester. 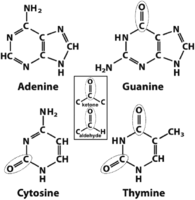 They can be separated into two groups:

On one hand, the purines, that are composed of two rings: Adenine and Guanine

On the other hand the pyrimidines, that only have a ring: Thymine and Cytosine.

The DNA, as we have already stated, is the stocker of the genetic information.

The alpha-helices: DNA chains are aligned so they are in an antiparallel way, which forms a helical. That spiral is due to the hydrogen bonds between the nitrogenous bases.

Those bonds are the following

The info genetics is stored in the sequence of nucleotides. Therefore, what is gen?

A gen is a portion or segment of DNA. Each gen codifies for a particular protein.

GENOMA:  It's the set of genetic information, transmitted in a hereditary way, the whole assemblage of genes, the sum of the complete DNA.

Individual genoma: All the information contained in a group of halode chromosomes.

Specie's genoma: the population of a species shares the genes, and most of the information contained in each one, with subtle differences, therefore, each species has a content of similar genetic information.

The complexity of the genome comes from the variety of DNA sequences that compose it, and the number of copies of these sequences.